The origins of the idea behind ArCADia discipline applications system date back to ArCADia-ARCHITECTURE and ArCADia-IntelliCAD 2008 programs, the primary purpose of which was to accelerate the creation of a .dwg drawing. Designed for the construction industry, these programs had no additional discipline modules at that time. However, they were equipped with internal mechanisms as well as additional functions e.g such as the automatic drawing of walls, inserting windows, doors, making of statements, use of an extensive library of .dwg blocks.

The idea of the system based on using objects rather than just lines in a drawing allowed us to extend it to the areas related to BIM-based design. In subsequent years we have introduced ArCADia – EXTERNAL DRAINAGE, ArCADia – POWER GRIDS products to the market. Our purpose was not only to facilitate preparation of a drawing but to create a digital model of the designed building. During this period, our design works were focused on obtaining a design system incorporating all construction sectors, allowing a drawing to be prepared according to the assumptions of BIM technology, namely to devise a fully functional digital model of a building, which will contain not only plenty of digital information describing the building, its structures, applied systems, equipment as well as maintenance information such as energy demand etc. A breakthrough for the whole ArCADia software was the creation of ArCADia-START drawing software with an intuitive interface and ArCADia-TERMO program (now ArCADia-TERMOCAD) intended for calculations of the energy demand of buildings. In which the possibility of importing from a .dwg drawing, made using ArCADia-ARCHITECTURE extension, the idea of free data exchange between applications was demonstrated for the first time, certainly bringing a revolutionary benefit for the users of our programs. When designing subsequent ArCADia elements, designed for specific design disciplines, compliance with the BIM assumptions has become a priority for us. Along with subsequent modules, our design system has become an environment incorporating all of the construction sectors and all aspects of preparing an architectural design. Currently, the ArCADia BIM system consists of a dozen or so discipline modules and additional ArCADia-IFC, ArCADia-3D MAKER tool applications as well as free ArCADia-TEXT and ArCADia-3D VIEWER extensions. 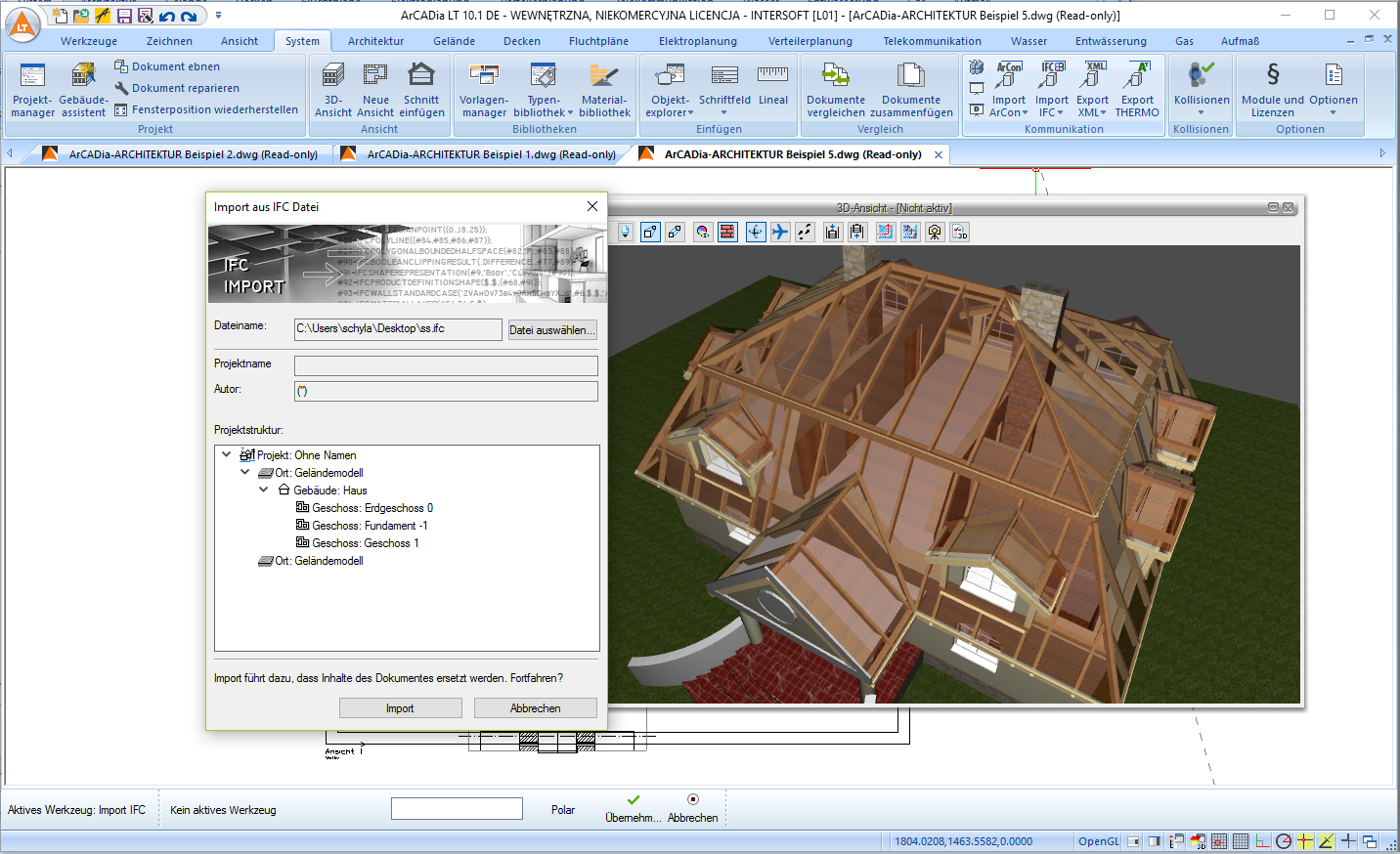 The basis for BIM technology is not only the design and work in 3D mode, but the integration of information about the designed structure in the form of a complete, virtual model incorporating not only data concerning the architecture and structure of the building, but all of the discipline-related problems.

BIM Technology brings a number of benefits for designers. First of all, it makes the multi-discipline designing process proceed in parallel and the designers of particular disciplines can work at the same time over the same design and watch the progress of another teams’ work, which significantly simplifies consultations and reduces the number of collisions arising in the design. However, in order to make it fully possible, thinking about BIM-based design we need to go beyond the restrictions imposed on us by an individual computer workstation and a single team of designers. That is why our present developmental work on the ArCADia BIM system is focused on increasing and facilitating the possibilities of communication between designers of particular sectors as well as a data exchange between them and between other manufacturers’ applications, so that the designer using the ArCADia BIM system would not be restricted with regard to the selection of their co-workers. The result of this work is our system’s constantly improving automation and cooperation with our subsequent programs. One of these is the ArCADia-FRAME software, an advanced tool for making complex calculations and designing construction structures. We are also developing ArCADia-IFC data export/import module in .ifc file format which allows us to exchange data with other manufacturers’ software.

Gradually, subsequent BIM supporting applications are being released onto the design software market. Their manufacturers choose various assumptions and paths to create a program consistent with BIM. As a result, in spite of the fact that the purpose of BIM technology was also to standardize the method of design, applications very often differ from one another with regards to interface and method of operation.

They introduce numerous new solutions, different from the traditional CAD environment which designers have gotten used to over the years. Our ArCADia BIM system is an environment based on the Intellicad program interface. As a result, we work with it in a similar fashion as with the most popular AutoCAD software. ArCADia BIM does not lose anything from a traditional CAD environment and, what is more, the designer has the possibility to install it as an extension to the AutoCAD software and make BIM-based designs in a familiar environment. An important feature of the ArCADia BIM system is the fact that designers, having only some industry modules e.g. designing electric systems, do not have to worry that their designs will not be available to the architect. A complete drawing is fully portable and retains all the data about the elements of the building regardless of the scope of the licensed system modules. At the same time, a design made using ArCADia BIM is fully consistent with the .dwg format. and is available to designers using traditional CAD software, it is then seen by the CAD program as a traditional .dwg file. 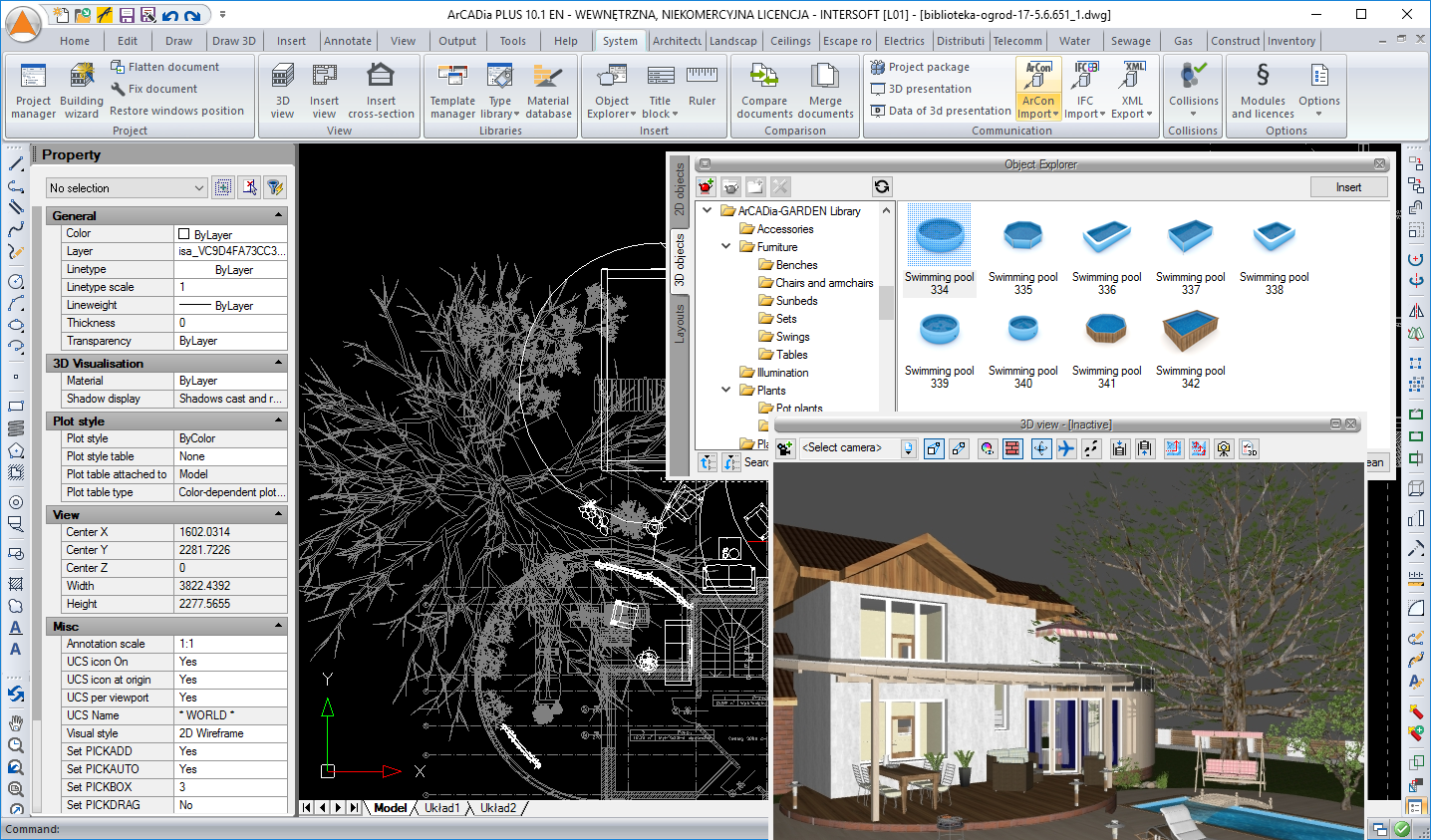 ArCADia is a program supporting 2D and 3D design. Due to its operational philosophy and the same data saving format (DWG), it closely resembles the Autocad program.
The ArCADia PLUS 10 software has all the features of the ArCADia LT and ArCADia software and, in addition, is enhanced with the following functions: The option to create and fully edit ACIS solids. ACIS files are based on the block modelling format developed by Spatial Technology Inc. It allows for precise work on full solids, penetration, sums, differences, etc. File import and export in the SAT format.
ArCADia AC is an add-on to the AutoCAD software which enables the embedding and communications of the ArCADia systems base functions with the AutoCAD software. Communication with the AutoCAD software ArCADia AC is a special version of the system that allows to install it with the AutoCAD software
ArCADia LT is a fully functional, easy-to-operate and intuitive CAD program that allows object-oriented creation of 2D building documentation and saving files to the 2013 DWG format. It is a basic graphic design tool for the construction industry in its broadest sense.